Hero delivery driver risks his life save a neighboring businessman

A delivery driver has been hailed a hero after he stormed in a burning building and saved a businessman who had been brutally stabbed.

Ibrahim Elakkaoui ran into Italian restaurant Essenza in Surry Hills at about 11am on Thursday where he found the 39-year-old Angelo Ziotas screaming for help.

‘Someone was upstairs screaming, so I went in and busted the door down, pulled him out of the window, put him on my shoulder, took him down,’ Mr Elakkaour told 9News.

Ibrahim Elakkaoui (pictured) ran into Italian restaurant Essenza in Surry Hills about 11am on Thursday He said Mr Ziotas was screaming that he had been stabbed and his dog was still trapped in the fire.

‘My first thought was to pick him up and then rescue the dog,’ he told The Daily Telegraph.

‘That’s our duty of care in Islam. If you save a man, you save all mankind.’ , Ibrahim, the rescuer, remarked humbly. 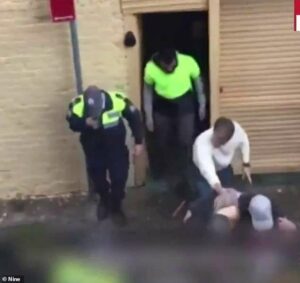 Three men (pictured) stormed the burning building where they found Mr Ziotas with stab wounds Another rescuer, Scott, said there was a lot of blood and not enough time to go back to see if anyone else was inside.

‘Unfortunately the flames and smoke were so strong we couldn’t even get back in to see if anyone else was there.’

Mr Ziotas was taken to St Vincent’s Hospital for his stab wounds, where he remains in a stable condition. 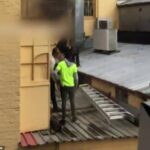 Mr Ziotas was taken to St Vincent’s Hospital for his stab wounds, where he remains in a stable condition

NSW Police said they are treating the incident and fire as a ‘very serious crime’.

‘By the nature of the incident and the circumstances around it, it’s a very serious crime. Its being treated with the most significance in terms of the response,’ NSW Police Superintendent Gavin Wood said.

‘The investigation as we speak is in its infancy stage, There are a number of lines of inquiries that we are looking at.

‘The circumstances around the fire and the injuries to the male are significant and are both being treated as suspicious.’